From the London Overground train bound for Stratford, alight at Hackney Central (an action which no longer sounds worrying to many, post Olympics) for a beer at The Cock Tavern, a recently refurbished and reopened brewpub from the owners of The Southampton Arms in Kentish Town. They have clearly nailed the set up in NW5, and although that is with a more affluent collection of locals, here they have the bustling centre of Hackney (the town hall is opposite) and a trendy crowd of young revellers just to the south in London Fields. They haven’t just stuck to the Southampton Arms formula; they have run with it, providing 10 cask taps (2 for cider) and 8 keg lines for independent breweries, high quality traditional pub snacks for food and a barren space with distressed wooden furniture and creaky floorboards. 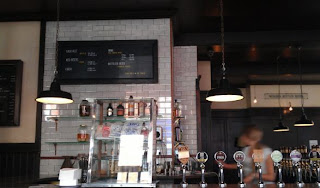 The best thing about The Cock Tavern is the beer. Red Willow, Thornbridge and  Dark Star all featured on cask; along with a couple from Howling Hops, the beer brewed downstairs using the very same equipment that Camden Town Brewery started with at the Horseshoe Pub not long ago. If that success story is anything to go by, Howling Hops could well be a name to look out for in the future, but right now the beers are a little way short of that. If you name your brewery Howling Hops, there had better be plenty of them, which wasn’t really evident in the aroma or taste. The IPA was better than the Pale, but both were far too bitter, dry and thin without a great deal of hop character or depth – it is early days yet though and these are likely to improve. The Keg selection is perhaps even more exciting, with beers form Moor, Harbour and Magic Rock joined by some leading lights of London brewing – London Fields Lager, Brodies Kiwi IPA, Kernel IPA and Camden Town’s fantastic 1908.
Beyond the impressive casting though, there is not much to entice and delight. At their North London venture, a dedicated crowd of locals and craft beer pilgrims in addition to live music and a small garden, lifts the experience so the whole is more than the sum of its parts. Here, with the blues playing through speakers, uncomfortable benches and lots of empty space, it feels too much like Moe’s Tavern without the comedy & drama – a bit hollow, masculine and downbeat. However, this as an attractive high street pub in an area that could well provide it with plenty of characters to fill the rafters, and become a cool, atmospheric place that people use as a reason to come to this part of town.
Just a couple of stops further East on the train is Hackney Wick, where one can find Crate Brewery. The property prices, cool cafés and the view of the Olympic Stadium may suggest otherwise, but this is definitely the middle of nowhere – fortunately it is well worth the trip. Hidden (it took a few attempts to find it) within an ugly car park, any initial scepticism is banished by the attractive outdoor seating area, with its sturdy picnic benches and the succession of herb gardens hugging the River Lea. Inside the converted warehouse, a compact island bar is surrounded by so much space and natural light that the fonts take on the role of gallery art; moustaches and playsuits alike examining the beer selection with obvious anticipation but a fair amount of ambivalence, so as not to disturb the achingly cool urban vibe bouncing off cold concrete and wood. Instead of the smell of wet malt and dry hops, the air is abundant with sweet dough and charred meat wafting from the pizza oven. They are seriously good - thin, crisp and hot with the unusual flavour combinations surprising and delicious – the laksa chicken was delightful. 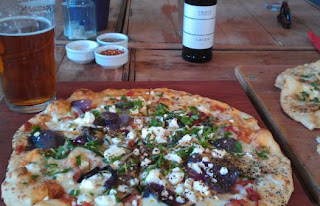 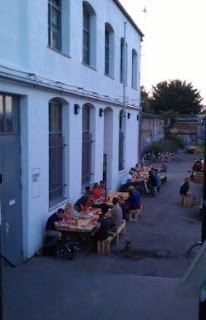 Some decent German pilsners sit alongside a couple of English keg beers, and with a guest ale on cask. There is also a brief wine list and some ginger ale for those so inclined, but most are here for the house beers, brewed just out of sight in an area alongside the bar. Their IPA available on cask was clean and bright, a deep orange colour with a frothy head. This is a bit boozy for cask and lacks a bitter, hoppy finish, but this is still a very decent, drinkable beer. The Gold is clean and refreshing; with plenty of carbonation giving the dry, pithy citrus flavours an extra dimension that lifts it above the norm. The real winner though, is the Lager. Presented in smart looking bottles, it pours dark gold with a thick white head, looking attractive and appetising. Floral and biscuity on the nose, a little toffee sweetness upfront leads to buttered bread, citrus pith and a long dry, grassy finish. Clean, crisp, full bodied and balanced, this is an excellent example of an amber lager, reminiscent of Brooklyn’s version.
There are plenty of places in East London this trendy, but very few are this much fun. Beer this good means the brewery is taking things seriously, and delivering it in this casual, uncomplicated venue is an ideal way to showcase their qualities. We could perhaps ask for a few more quality beers on the taps, in addition to getting their full range on draft, but if you do work your way through them prematurely there are a few decent bottles in the fridge, from the US and closer by - The Kernel beers look particularly good in this setting. This place is certainly at its best in the summer sun, but even in the depths of winter the beer will still be good, the pizzas hot and the tables will most definitely be full. 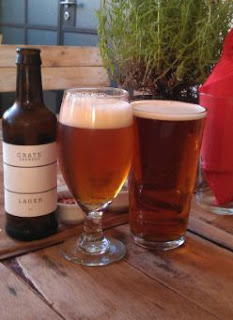