With a discernible increase in attention being paid to beer in recent months, through blogs, magazines, newspapers, TV shows and on-the-ground discussion, it is important for breweries to be in the right position for positive exposure, both commercially and in terms of their product. Add the Olympics into this equation and it is clear that London breweries are in an exciting but competitive arena. Taking notice of this are Fullers, who have gone out and bought a new suit for the occasion. Not only have they recently opened two big additions to their pub range, one very literally and the other more figuratively, but hey have launched a new beer to stock in them as well.
Slightly off the beaten track in London terms is The Union Tavern in Westbourne Park. It almost feels as though two pubs have been sown together, so different are the ground floor saloon and the subterranean lounge propping it up. Downstairs is remarkable only for its miniscule bars (two of them, each around three feet across) and a reasonably pleasant terrace area which is not burdened with the radiance of sunlight but rather the red glow of parked London buses reflected in the murky green surface of the canal. Up in the larger main bar where musicians entertain a diverse crowd, things are quite exciting. A couple of familiar international lagers are surrounded by London centric craft beers – loads of them, on cask and keg – which cover more of our capitals breweries than any other bar I have visited. Fullers is the noticeable missing link – only Pride was available on our visit, as the pub clearly is not a mere outlet for its own creations. Perhaps it should be less modest – while it is interesting to drink draft Sambrooks, Moncada and By the Horns beers, they are way behind the curve in London brewing terms and a pint of Bengal Lancer, arguably Fullers best beer, would have been much appreciated.
Redemption and Kernel were much better, with two different beers on keg from the latter being a particular rarity. Once you have worked through the draft offering the fridge has plenty of intrigue. Stocked somewhat randomly with more London beers and some eclectic offerings from afar - Orval, Pannepot, Saison Dupont and Racer 5 for instance. The best thing I drank all night was a bottle of Lovibonds 69, a stunning crisp, dry and bitter IPA from a brewery upsettingly just too far outside the M25 to claim as a Londoner.
With less of a local feel is the food menu, with the in-house smoker given free rein to do naughty things to meat. This is largely successful, with the pulled pork and ribs particular highlights, well complemented by quality chips and coleslaw. The occasional missteps of dry brisket and sausage and under-cheesed macaroni were forgivable, especially at this price, and a meal here is worth the trip even without the beery delights on offer. The salty, sweet and smoky array of food is a playground for those interested in beer and food matching, with more than enough styles available to make a night of it. 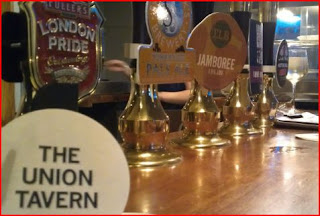 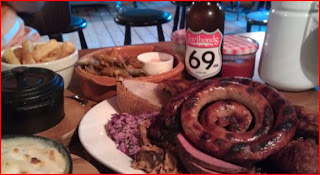 While one could suggest that the pub is a touch strong minded about its beery intentions (wine choices are little more than red or white) that would be mightily grouchy given the diversity of pubs in North West London and sheer number of wine/cocktail bars. Towards the end of the evening as the band were winding down and we were sampling the quite bewildering smoked nuts, some customers walked in and enquired if Budweiser is stocked. ‘No’ was the reply. Even ignoring the admirable commitment to London breweries, this is a pub with a huge amount to offer beer enthusiasts, and enough in the tank for those who just fancy a pint and some pork. 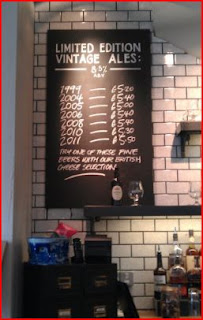 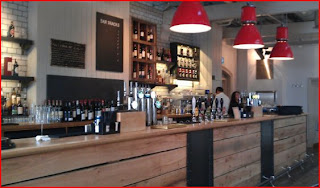 If an isolated pub in the west is fine for a bit of experimentation and adventure, Fullers perhaps felt that in the eye of the storm they should fall back on tried and tested methods. The Parcel Yard brings the big guns of traditional British pub lore; in addition to almost all the Fullers beers available on cask, there is wood – old wood and plenty of it, memorabilia from times past, brown Windsor soup and sticky toffee pudding. They are going full throttle with old style English charm, which is weird given that the Grade I listed building is set within the cavernous spaceship that now encloses Kings Cross station, with its endless chain restaurants and giant touch screens for finding your way to the nearest Pret. After climbing some ugly metal stairs and entering the largest station pub in Britain, one might begin to wonder if this is some idyllic countryside antiquity somehow transported here through platform 9¾ a few fictional yards away, to this hyper designed Olympic junction. Of course, on closer inspection it is clear that this too, is hyper designed and ultra-modern, cunningly disguised as somewhere for locals to gather on cold nights as opposed to the tourist attraction it is, offering hordes of visitors a slice of Britannia. However rather than this being a regrettable drawback, it works beautifully, the creases ironed out and trendy flourishes added in to create something wonderful.
The strength of Fullers catalogue is apparent, as their beers impress across the platforms of cask, keg and bottle. A cold pint of Discovery will be welcome in the Olympic months, and a well-kept ESB will soothe the soul before a trip home. Lager from the big boys and also Meantime, in addition to some guest cask beer, gives a balanced feel to the beer selection, although pretty conventional as you would expect. Far more exciting is the extensive list of bottled Fullers Vintage ales available at very respectable prices, ideal with some cheese but also with many of the dishes on a menu so deliberately British I think I heard it singing Jerusalem. The sheer size of the place allows for multiple rooms which are joined in theme but differ in atmosphere. The main bar is flanked by a large room which more closely resembles a restaurant, and also an airy space which feels like a courtyard in a French orangery. Traverse the branded iron staircase to find the open, attractive loft area which could be a wine bar in Brooklyn, with Baba O’Riley on the stereo another clue that this is a ‘we heart Britain’ pub with international ambitions.
There are those that will dislike the stylised, theatrically presented version of an old school boozer, the elevated prices for both drinks and food, and the vast open style that can feel empty and impersonal. But the sheer scale of ambition and attention to detail on show here will be enough to impress the tourists, win over craft beer newcomers and please existing fans of Fullers. Despite the electronic timetable in the hallway showing departure times, this place is going to cause a few missed trains.

Following the trend for breweries to have an American style IPA in their locker, Fullers have released Wild River, a 4.5% ‘double hopped’ beer with 4 different US hops providing the star attraction. As you might expect from this brewery, balance and drinkability are high priorities and therefore the beer is not an attempt at a hop bomb. What we get instead is a clean, dry bitterness with the hops providing a grassy, lemony flavour, more reminiscent of a hoppy English golden ale than a US IPA. Incredibly drinkable and moreish, it does feel too restrained in alcohol and bitterness to really shine (especially so given the name). It is good to see continuing innovation on the pumps from Fullers, and a move towards more modern seasonals would be pleasing as there are still some being regularly produced which do not live up to the high standards they have set in their permanent range. 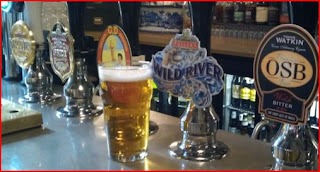